As a composer I enjoy writing for bands, theatre and syncing. My work is quite varied, due the breadth of musicians and theatre companies I’ve worked with, also due to my ongoing interest and journey into music technology. Writing to order is something that excites me and I embrace the challenge of bringing image to life using music.

Theatre – Over the last 6 years I have played and written music for a number of contemporary theatre productions and had the opportunity to work with some world class composers which has given me great insight into the world of theatre and composition. I have listed the productions I have been involved with at the bottom of the page.

Solo –Due to being away touring (with KT Tunstall and Mogwai) I have reluctantly had to turn down quite a few theatre and writing opportunities both in the UK and the States. However, thanks to Covid-19, I have been able to focus on my writing and I am now producing a body of instrumental work which I am proud of (and which has already received support from Gateshead Sage). I am in the process of applying for funding to turn this into an album with a view to sync. You can hear examples of my most recent compositions (via a password from me) here. 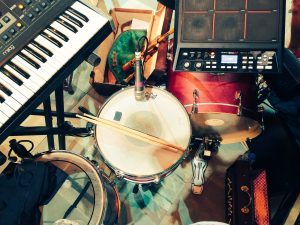 Below is a list of theatre I have been involved in;  The productions I have composed for are in black and the rest I played on as a multi-instrumentalist.