After haphazardly educating myself in the ways of website building & after taking an amusingly long amount of time over it, I’ve finally finished my new website. I’m hoping it’ll become a base where I can throw together my various projects under one little cyber roof, with an added blog for my musical ramblings.

2015 was a ridiculous year for me, I toured, ..a lot, turned 30 in sky somewhere between the USA & UK, played some of the biggest gigs of my life, got engaged and then realised my childhood (& adulthood!) ambition of supporting the Foo Fighters. It couldn’t really get much better!

This year I’m going to attempt to document slightly more of what I get up to, there’s a lot coming up over the next 12 months & I’m excited to get started.

I’m currently hard at work with a new/old project; around 9 years ago I wrote a drum tuition book & my plan is to update it and bring it back to life in my spare time. I’ll keep you in the loop, it’s a bit of a monster & I need to get my head around a lot of new skills to make it work. Time will tell!

I’ve had some relatively well earned time off so far in January after I missed Xmas due to the panto I was playing Drums, Bass (via SPDSX & a midi foot controller), Guitar, Keys, Sound effects (via SPDSX) plus various chimes and whistles in! It’s awesome to do something different & it definitely kept me on my toes. Just after that had finished I had one last trip down to London to finish off the last of the drums on the new Honeyblood album, it’s sounding pretty beefy & I had an ace time bashing around on a couple of super phat DW kits. 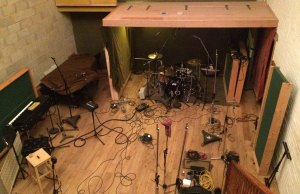 Coming up next I have a couple of random gigs including a gig in Manchester on Sat 6th Feb at ‘Matt & Phreds’ sitting in with my old 8 piece funk band! Come & get involved.