On Nov 4th ‘Babes Never Die’, Honeyblood’s second album was released & after the first week it was no.2 in the vinyl chart which isn’t too shabby! It’s the second album this year that I’ve been lucky enough to have co written & played on, the other being ‘Bury Everything’ by Stillhound.

We’ve managed to get a bunch of banging 4 & 5 star reviews for ‘Babes Never Die’ from the likes of NME, The Guardian, Clash, Q Magazine, Mojo, DIY Magazine, Drowned in Sound, & God is in the TV.. amongst others!

We worked pretty hard on the new live show, I’ve managed to master the art of playing bass & drums together (triggering individual bass notes on my SPDSX whilst playing the kit – incase you’re wondering!),  I like to keep all limbs busy at any one time. Here are a couple of links to some of the awesome live reviews we’ve had from the tour – here, here, here & here!

We flew back into London from our show in LA on November 8th & played an in-store at Rough Trade on the same day.. despite the jet-lag & therefore our slightly bizarre on stage chat, it seemed to go reasonably well. The next day we flew back up to Scotland to play another in-store, this time at HMV Glasgow, the jet-lag was still hot on our tail but we pulled through, this time replacing the questionable banter with spontaneous laughter which somewhat surprisingly, people seemed to be onside for.

After a rare couple of days off we set sail again in a little van for our biggest headline UK tour ever.. ooooh. We hit up Newcastle & basically worked our way down the list below. 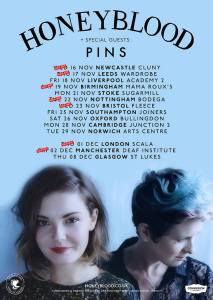 Most of the shows were sold out by the date of each gig. You can’t ask for more than a full audience & swirling mosh pits, amazingly, that’s what we were treated to most nights.  We made sure to say thank you in the form of terrible banter & impromptu songs, mainly to serenade Hazel our merch lady.

Whilst we were away we recorded a session for a Japanese TV Show to be aired on NYE (kinda like a Japanese Jools Holland), we played some tunes & had a crack at speaking Japanese.. it’s hard to know if we made any sense, apologies to Japan in advance just incase. We also popped into Virgin radio to play a session on Edith Bowman’s breakfast show which was ace, despite having to get up early doors & drinking my weight in coffee to get my drumming muscles up to speed! 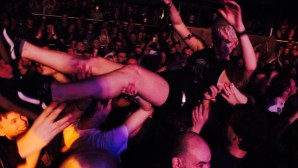 We finished up the tour at the start of December in London (which included a spot of crowd surfing for me) then Manchester (possibly the sweatiest gig I’ve ever played) & rounding it all off with an amazing home coming gig in Glasgow.

I’ll be having some downtime before Christmas & then picking up the work with some sessions & private tuition in January, give me a shout if you’d like a lesson or would like to book me for a session.

Bring on the new year!