June kicked off with Hidden Door Festival where I was playing drums for a show called ‘Glittered’ by Eve Nicol. I mentioned it in the last blog post & you can check out a review of it here.
I ran away to Croatia for InMusic Festival in Zagreb in mid-June, I spent a week in the sunshine, catching sets from some awesome bands such as PJ Harvey, Wilco, Pennywise & Gutterdammerung – the loudest silent movie in the world!
Here’s PJ giving it all that. 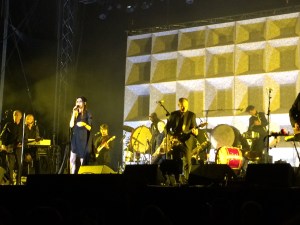 On July 8th I flew off to Pohoda Festival in Slovakia with Honeyblood. It turned out to be a pretty awesome weekend, despite Stina & our TM Kenny both missing the flight out! I managed to catch the flight (it’s obviously a drummer/timing thing..) & ended up flying solo in Slovakia. I decided the most sensible thing to do was drop my bags at the hotel & hot foot it to the festival & find some new pals.
It turns out Slovakia is awesome & Pohoda is possibly the friendliest festival in the world… So, it took all of 5mins of standing in the sun, drinking a delicious cold beer, watching a ridiculous Japanese band (with an orchestra & a giant & a sheep & a Theremin & a dragon flying through the audience) before I was approached by ‘Slávik’ & ‘Zuzana’ who said “Nebudte sami, podte s nami” which is a rhyme that translates to “Don’t be alone, come with us!”. To cut a long story short, I ended up partying with them & their friends all weekend, seeing a bunch of awesome bands (Sigur Ros, Prodigy, James Blake, Public Service Broadcasting to name a few), learning some Slovak (which I then attempted to use on stage with Honeyblood.. with varying degrees of success) & hung out at their camp ground. Total bunch of legends & I look forward to them coming to visit Scotland sometime soon. Thanks for rescuing me guys! Other big news that has just gone down is the release of the first Honeyblood single ‘Ready for the Magic‘ from the new record “Babes Never Die”. It was premiered by Annie Mac on Radio 1 on Wednesday 13th July. We also announced a little headline album preview tour in Sep. Things will be kicking off with us for the rest of the year so stay tuned & I hope you’re digging the new single, check it out below.. (I managed to squeeze in a cheeky 2 bar mega fill which is quite satisfying to play live!)
Oh & I ran my 10K, (& incase you read my other post regarding running & drumming..) turns out it does make you a better drummer & you can play so fast your sticks set on fire… FACT. Here’s me getting my bling on after running on the second hottest day of the year.. eek. 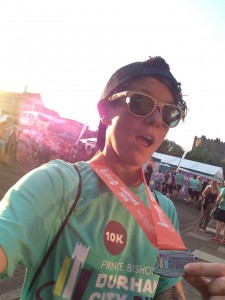 I also have way more theatre stuff to announce which kicks off in August, I’m part of a very exciting National Theatre of Scotland collaboration which I’ll tell you about soon. Loads going on!
Anyway, here’s me dressed up like a trendy hiker.. BYE.